Mo never gets a hit and is stuck playing right field. No balls ever come to right field. But every time Mo is at the plate, he has a chance to help his team. Will Mo ever get a hit?

This sequel to the 2016 Geisel Award Don’t Throw It to Mo! continues the story of Mo Jackson, the tiniest team member of both his football team and now his baseball team. I connected personally with Mo. I played right field for three years of T-ball and baseball and he’s right — no balls ever come to right field! (Lucky for me, I was so short that I basically didn’t have a strike zone.)

Things I love about this book: racial diversity and gender diversity (Mo’s coach is a woman!), relatable series, lots of repeated words and familiar words for sports fan.

Things I don’t love about this book: the contrast between background (green grass) and black words was not enough for me to feel comfortable, and the book ends with a neat bow again. Mo saves the day again. That kind of a set-up would bother me as a kid after a while. I hope that if there are future Mo books that he has to learn to lose as well.

Even with the minor flaws, recommended for public libraries. 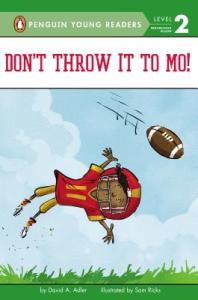 Winner: Don’t Throw It to Mo! by David Adler

Mo loves playing football for the Robins. He’s one of the youngest (and smallest) players on his team. When the bigger team — the Jays — notices how small Mo is and how he isn’t playing, Mo’s coach makes a plan for the Robins to win: Don’t throw to Mo! But can Mo catch the ball when coach does decide to throw it to Mo?

This Penguin Young Readers Level 2 book is a perfect match for sports fans and beginning readers. The text is big and easy-to-read while the illustrations support the story in bright colors. I absolutely fell in love with the illustrations in this book. The tiny details (sweat coming off of Mo doing chin-ups, dirt stains on the uniforms, the lines indicating the ball’s movement, I could go on) really enhance and support the text.

A second volume to the Mo Jackson series — Get a Hit, Mo! is scheduled to release this February! I know I’ll be eagerly snapping several copies up for the library.

Honor: A Pig, A Fox, and a Box by Jonathan Fenske

Fox tries to trick his friend Pig by hiding in a box. But when Pig accidentally sits on the box, Fox is flattened. Can Fox hide again and surprise Pig? This beginning reader uses cartoon dialog bubbles to show which character is speaking. The rhyming words of fox/box and pig/wig will be great for beginning readers.

Five friends sit on a windowsill and wait for many things: the moon, the rain, the wind, and the snow. This picture book from Caldecott medalist Kevin Henkes works well for beginning readers — the text takes up a majority of the page and there’s a wonderful amount of repeated vocabulary. The book also allows readers to form and answer questions of their own about the storyline.

All of the trucks have jobs in the city. But when a snowstorm stops them from doing their work, who will rescue them? Leave it to SUPERTRUCK! This story of an “underdog” garbage truck who manages to save the day will work both for beginning readers and as a great toddler storytime book. The clean illustrations are very pleasing to the eye and the text is predictable for beginning readers.

The views expressed on this site are my own and do not reflect those of my employer or its patrons. The content here belongs to Step Up Readers, unless otherwise expressed.
Loading Comments...